Breaking Trade-offs for Fun and Profit!

In late 1888, groups of spectators gathered on the banks of the Seine for a spectacular show: the collapse of the Eiffel tower. A prominent engineer had predicted that the tower, then under construction, would collapse under its own weight when its height reached 200 meters. Needless to say, while the sauvignon blanc and camembert may have been excellent, the show was disappointing. The tower did not collapse.*

From the beginning of civilization through the 19th century, builders faced a trade-off between a structure’s height and its mass. Designing a tall building was easy; designing a building that was tall and thin was hard.

As an example, for several thousand years the title-holder for world’s tallest building was the pyramid of Khufu, in Giza, Egypt. The pyramid is 481 feet tall. Boston — where I live — would have to wait until the 20th century to get a building that tall. The reason there were so few equally tall buildings built in the intervening 4000 years was simple — getting to that height required tremendous mass. The pyramid weighs 5.75 million tons. Over to 11 billion pounds.

Though building techniques were refined over the centuries, the trade-off between mass and height was always there. Gothic cathedrals use a lot of tricks to seem slim, but check out those exterior walls — they are massively thick. Architects internalized this tradeoff right up through 1888 — tall or thin, but not both.

Though steel had been known for a long time (viz samurai swords) it was not available as a cheap, abundant building material until the invention of the Bessemer process in the 1850’s. From then on, the trade-off between height and mass was broken: extremely thin buildings could be made extremely tall.

The Eiffel Tower was a dramatic demonstration of the new reality: it is 984 feet tall, but only weighs 7,300 tons. It is twice the height of Khufu’s pyramid, but has only 0.001% of its mass!

We say that technological innovations like this are “off the line.” A product from Fluid Efficiency, one of our portfolio companies, illustrates this language vividly. Hydraulic fluids face a classic engineering trade-off: they must be thick (extremely viscous) in order to efficiently transmit force. They must also withstand tremendous shearing. People make hydraulic fluids by mixing additives into base oils; these additives thicken the fluid appropriately for different machines. The better an additive is at thickening, the worse its shear stability, and vice versa (see chart). 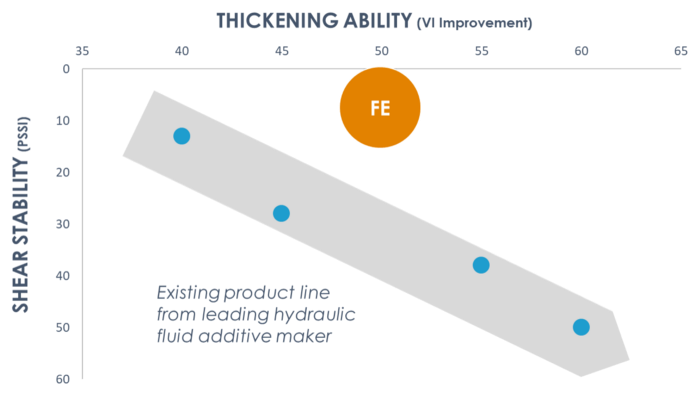 Fluid Efficiency recently invented a self-repairing additive that thickens extremely effectively, but also repairs itself when put into extreme shear conditions, much to the relief of engineers who have battled this trade-off for their entire careers. This product appears as the orange circle in the chart — way “off the line” of traditional technologies. It’s the Eiffel Tower of hydraulic fluid additives.

The best industrial innovations are magic: they break some traditional trade-off and make the previously believed-to-be-impossible possible. They are off the line.

* This incident was related to me in 1997 by Henri Pradelier, Professor of Architecture at the University of Toulouse le Mirail. His embellishment and my memory may have mythologized the story somewhat.

If you are raising funds or simply exploring the commercial potential of your innovation, we are interested in speaking with you. Send us a note to start a conversation!