Beware analogies.  They can tempt you down dangerous paths.

Last week I read, with a twinge of sadness, Scott Kirsner’s account the demise of Gen9, a gene synthesis company in Cambridge.  Gen9 (where I am friends with some of the key people) promised to deliver huge amounts of custom synthesized DNA very quickly and very cheaply, but never achieved a gross profit that could support their fixed costs.  In the end they sold to a customer for an undisclosed price.

Kirsner reports that Gen9’s lack of profitability was due in part to “customer demand [that] wasn’t picking up as fast as the price of the DNA was dropping in the market.”  That is certainly a proximate cause of the challenges at Gen9, but I think this is really a case of death by analogy.

Analogies are traitors, who like Brutus make a friendly approach and then stab you in the back.

An analogy compares something familiar (let’s call it FOO, for all you computer scientists out there) to something unfamiliar (let’s say BAR).  If we understand the internal workings of FOO, the analogy urges us to see similar internal workings in BAR.  If the comparison is valid, then it helps us understand BAR better.  But if the comparison is superficial – i.e. BAR kind of looks like FOO but actually works very differently – it creates the illusion of understanding.  And if you think you understand something, but really don’t, you are bound to make bad decisions.

Take a look at this first chart.  It comes from a 2009 Economist article, which happens to be the same year that Gen9 was founded.  What do we see?  A logarithmic scale, showing exponentially decreasing costs in DNA sequencing and in DNA synthesis.  For sequencing the time scale is pretty long, and the trend appears to be accelerating.  For synthesis the time scale is smaller, but it looks consistent.

Now take a look at this second chart. It shows the cost per transistors in integrated circuits (chips). It is also on an exponential scale, and shows consistent exponential decrease. Moore’s Law, a famous conjecture made by Intel founder Gordon Moore in 1965, predicts that the number of transistors per unit area in integrated circuits will double every two years. A corollary to Moore’s Law is that costs will fall in proportion to the increasing transistor density. This prediction has proven remarkably reliable. 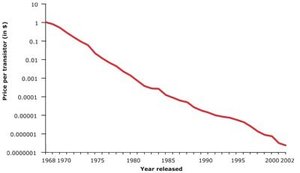 The analogy between the two charts seems obvious: Moore’s Law is operating in DNA synthesis! The cost of synthesis is going to keep decreasing, just like the cost of transistors! And as that happens, imagine what’s possible! The entire tech industry is founded on Moore’s Law. And now, we have Moore’s Law operating in the realm of life itself. The possibilities are endless, and we can’t even begin to appreciate what is going to happen, just like Gordon Moore couldn’t envision the iPhone! But this much is certain: the company that owns the technologies driving those cost curves is going to be the Intel of the 21st century!!

This analogy is trotted out continually in synthetic biology circles. Before I comment, let me first admit that I have raised money for synbio companies, and I have included these charts in my pitch decks. It’s a very exciting and compelling story.

And that’s exactly is why this analogy is dangerous. Your mind loves stories; it finds them easy to understand and very convincing. But this is a superficial analogy. It doesn’t illuminate anything. Seeing the transistor curve compared to the DNA synthesis curve doesn’t help you understand synthesis, and doesn’t help you predict what cheaper synthesis will enable (if DNA cost indeed continues to fall). Instead it tries to convince you that because transistor cost fell dramatically, and Siri resulted, then a dramatic fall in synthesis cost will result in something equally amazing and unexpected.

The Gen9 business case probably included an assumption that decreasing synthesis costs would enable new applications and drive volume, ultimately leading to high revenue and profitability. As Kirsner says, that demand never materialized. So what was wrong with the analogy?

Any analogy omits key parts of its argument. It is a story; filling in the connective logical tissue is left as an exercise for the reader. In this case, at least two important points were left out.

First, when you read the story above and came to the words “imagine what’s possible!” what did you imagine? If you’re like me, probably not much. If I could print infinite custom DNA I would… hmm… maybe medicine? A key flaw in comparing the IT industry to the synbio industry is that even back in the 1960’s, most of what we consider incredible today was readily imaginable. In 1966 there was even an episode of Star Trek where Kirk talks to Siri (only his Siri is WAY better than the real one). When the iPhone launched my friends called it the tricorder. It was amazing but familiar. It’s much harder to visualize what printing DNA enables.

Second, if we can’t imagine what will be possible it could be because we are just one person out of seven billion, and our imagination is limited. But some intrepid entrepreneur surely knows how to use this new capability to create amazing products that will consume gobs and gobs of custom DNA. And that is what will drive demand. This is just a synbio version of Say’s law, “supply creates its own demand,” a long since rejected economic theory. Being able to print more DNA more cheaply just means you can print more DNA more cheaply – it doesn’t mean people will buy more of it.

Bottom line: unless an analogy helps you understand something more deeply, it is a traitor that will turn your mind against itself and trick you into bad decisions.

If you are raising funds or simply exploring the commercial potential of your innovation, we are interested in speaking with you. Send us a note to start a conversation!